What is a DAO?

DAO, or decentralized autonomous organization, is a blockchain-based form of limited liability company that is often governed by a native crypto token. Anyone who invest in these tokens has the power to vote on key DAO-related issues.

A DAO is essentially self-contained. Based on a set of rules that are put in place at the start and then changed over time by stakeholders or an algorithm. It accomplishes tasks by utilizing a series of "smart contracts," which vary from traditional legal contracts in that they live and operate autonomously via the internet without the need for human interaction. Despite its autonomy, some activities, such as contacts with the legal system, are impossible for a DAO to execute on its own. Furthermore, because to its independent activity, a DAO can operate outside of a normal organization's administrative framework. Instead of top-down management, each member has an equal say in the organization's decisions, or all management can be handled by a computer program independent of the founding party's authority. In any case, no one person or party makes decisions within the DAO. 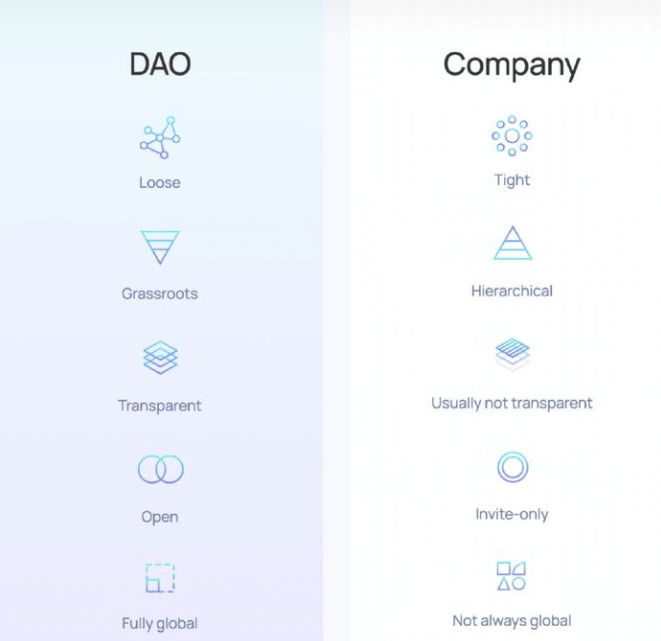 A DAO's financial transactions and regulations are recorded on a blockchain. This eliminates the need for a third party in a financial transaction, allowing smart contracts to speed up the process. The firmness of a DAO is determined by a smart contract. The Organization's storage is held by the smart contract, which also serves as a symbol for the organization's rules. Because DAOs are open and transparent, no one can modify the rules without the knowledge of others. Although we are used to organizations having legal standing, a DAO, which can be formed as a general partnership, can function just as effectively without it.

DAOs are more democratic than traditional corporations. Rather of being executed by a single party (depending on the company's structure), any changes to a DAO must be voted on by all members. Token-based crowdsourcing accounts for the majority of DAO funding. DAOs follow a set of guidelines. Traditional businesses are managed by CEOs, Boards of Directors, activist investors, and so on, whereas DAOs are governed by the community. Traditional corporations' operations are private, with only the organization knowing what is going on, and they aren't usually global, whereas DAO operations are completely transparent and global.

DAO is a strong organizational tool, but it isn't without flaws. They aren't the best system for every situation. Despite the fact that DAO may replace all parts of legal contracts with code and save a lot of money in the long run, there is no legal protection in some situations beyond the restrictions set in the smart contract that supports DAO. Although some DAOs may generate legal entities behind the DAO itself, if power of the DAO is centralized or the definition is ambiguous, this may pose complications. A Wyoming DAO bill was passed by a Wyoming State Senate committee, and it will assist in the establishment of a legally recognized DAO.

Another issue is that the DAO's quality may suffer as a result of the open membership. While MIT offered its opinions in 2016, it stated that it believes it is a terrible idea to entrust crucial financial choices to the populace. The corporation does not appear to have changed its opinion toward DAOs, at least not publicly. Security worries arose as a result of the DAO attack, as smart contract issues might be difficult to rectify even after they are discovered.

Table of contents
What is a DAO?