Sky Mavis, the studio that developed Axie Infinity, created Ronin — an Ethereum-linked sidechain made specifically for Axie Infinity. RON is the ecosystem token for the Ronin chain. It will eventually be used to pay gas fees and secure the network for both Axie Infinity and future games/products hosted on the chain.10% of the total RON supply are rewarded to liquidity providers on Katana DEX but no RON is for sale yet.

How Does Ronin Network Work?

Ronin mainnet uses Proof-of-Authority. PoA is a modified version of PoS and validators on PoA are usually less than 25. In the early stage of the Ronin Network, Sky Mavis will have sole discretion around validators. Therefore, the team has recruited an all-star cast of partners from the traditional gaming, crypto, and NFT space to serve as validators of the network such as Binance, Unisoft, Animoca, Nonfungible.com, Dapp.com,...

Validators on Ronin are responsible for authoring and validating blocks, updating price oracles, approving deposits, and transferring assets (ETH, ERC20, and ERC721) to and from Ronin.

The foundation also plans to integrate community validation eventually but needs efficiency and control to roll out features and keep the chain running smoothly in the short term.

On December, 23rd, 2020, Ronin Testnet was released to the public, and more than two months later, the Ronin Mainnet was launched on February 1st, 2021.

What Are the Main Features of Ronin?

What's the Relationship between Axie Infinity and Ronin Network?

Axie Infinity is a pokemon-inspired digital pet universe that has grown to be the most-played blockchain game recently. In the game, each player owns a unique Axie and can earn Smooth Love Potions (SLP) by breeding new Axies or trading in the marketplace.

Axie was first built on Ethereum, however, due to cripping fees and terrible network congestion, they had to seek solutions in order to maintain the user base.

The first solution was Loom Network. But one year since Axie launched on Loom, this network has undergone leadership changes and they have been focusing on enterprise solutions rather than user-facing applications. Then Axie moved. 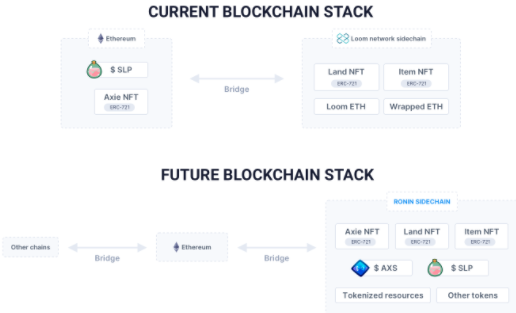 Ronin was born to be a second solution. In the beginning, Ronin focused on blockchain efficiency in order to enhance the user playing experience. However, in the long term, the team is also looking for various solutions to further strengthen and scale Ronin such as zKSyncs.

Who Are the Founders of Ronin(RON)?

The team behind Ronin Network is also the Sky Mavis team.

What Is a RON token?

RON is the native token of the Ronin blockchain.

How to Get RON token?

RON tokens now is being a Liquidity Provider on Katana(Katana is a decentralized exchange for Ronin. Katana will allow users to quickly swap users' assets anytime and anywhere on the Ronin blockchain at a low cost). To incentivize users and liquidity, 10% of the total RON supply will be distributed to the community, which, in this case, is all liquidity providers who come in the early 90 days since the launch day of Katana.

Where Can I Buy Ronin(RON) Token?